Gun enthusiasts can never agree about the best home defense firearm because every category of weapons has its own pros and cons. Handguns are easy to wield, rifles are more accurate and shotguns are more powerful, so which should you consider? First you must understand the challenges facing you when defending a home at night with loved ones around you and the relative strengths and weaknesses of each weapon type in these situations. Here are the issues relevant to each category of firearm: 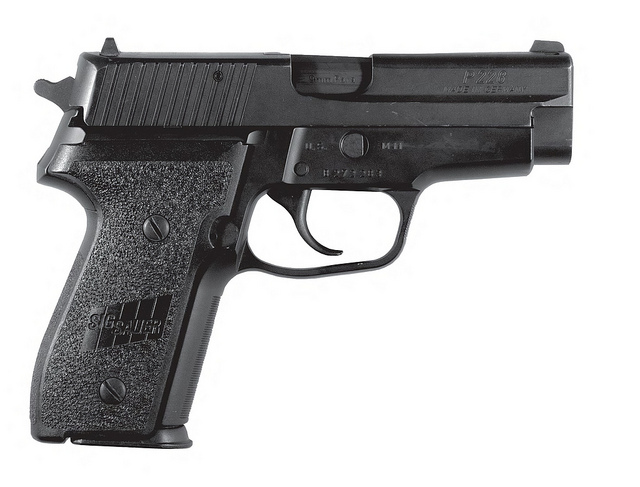 For most people their first self defense firearm will be a handgun. Small, portable, and easy to carry concealed, handguns are the most common firearm purchased for self defense. I

n many ways handguns are also ideal for home defense. When “things go bump in the night” and you have to check your house for intruders (called “clearing a house”), the smaller handgun is better for concealing near your bed, wielding when navigating around corners or opening closed doors and operating one-handed if you also have to grab a child.

When choosing a caliber of gun, remember that you probably won’t be wearing ear and eye protection like on the range, because you have to be able to hear the tiniest sounds, and see shadows and movements. Although there is military-grade eye and ear protection for these scenarios, they are expensive and you (and your family) might not have time to don them during an encounter. R

emember too that gunshots are often louder within small spaces of the house. 9mm rounds usually only leave minor ringing compared to larger caliber handguns like a .45 or .357 magnum (revolvers are louder in general). There is a big step up in noise produced by the powerful rounds in the rifle calibers, but a shotgun report is very loud can leave you temporarily deaf (or worse). Find a balance between bigger caliber weapons with “knock-down” power and the ringing it leaves in your unprotected ears after each shot.

If you do choose a large caliber weapon consider subsonic rounds (less than 1000 fps) which are quieter because they don’t make the loud “crack” as the bullet breaks the sound barrier. All gunshots still make quit a pop unless you invest in a silencer. Silencers are legal in 39 states and becoming quite popular among gun enthusiasts despite the $200 “tax stamp” that must be paid to the government each time you buy one. 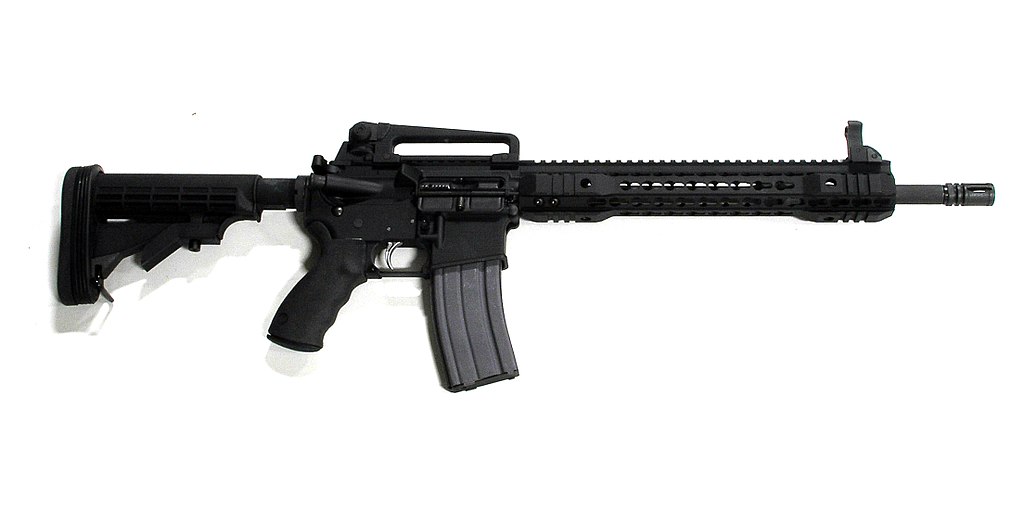 A rifle such as an AR-15 might not seem like your first choice, but it can perform well in home defense too. Plenty of military and police have learned to effectively clear even tight spaces with a longer weapon, and until recently, they also never carried ear protection. The principle advantages of a rifle are increased accuracy, more firepower and 30 round magazines. If your intruder is armed and you get caught in a firefight, your rifle will give you a decided advantage over a handgun.

Military-style rifle rails are often cluttered up with expensive and unnecessary accessories, but a tactical flashlight is a valuable addition. The idea is to clear your house without turning on interior lights, since these light up the room you are in and illuminate yourself as a target. Instead try to surprise the intruder with a sudden flash from a powerful tactical flashlight to blind them as you confront them with a command to stop or freeze. This light is important to identify the intruder from friends or family, but the blinding light won’t let him see (or aim at) you easily. SureFire brand lights are the best out there, but they cost upwards of $200.

Many people like shotguns for home defense because nothing compares to its “knock-down” power and its effectiveness in close quarters. Clear a house with a long gun can be a little cumbersome, but still possible, especially if done in pairs. If you live in an apartment you won’t have to worry about stray bullets going into the neighbor’s if you use birdshot rounds, but remember they are only really lethal to about 5 yards. Part of the benefit of shotguns is the variety of shells made for them, particularly if you have a 12 guage. The best for home defense if 00 (“double ought”) buckshot (lethal to 30 yards) or slugs (100 yards). Shotguns don’t have to cost much (like the pump-action Maverick 88 at under $250).

The downside to the power of a shotgun is, of course, the noise. Subsonic rounds help considerably but there isn’t much in this category to choose from. Federal’s Top-Gun 900 fps birdshot round is popular with scattergun enthusiasts, but to get larger buckshot in a subsonic shell you may have reload them yourself. Ballistic Products has reloading information for several kinds of subsonic scattershot rounds.

As you can see, every weapon has pros and cons. The best firearm for you will depend on your specific situation and familiarity with your weapons. Ultimately the best weapon is the one you feel comfortable grabbing in the dead of night and wielding accurately even during misfires. Can’t decide? You don’t have to choose just one if you can keep the others accessible. In fact, a popular competition is the three gun shoot that tests people in each of these weapons and highlights each weapon’s strengths. [END]

Few cleaning products in the grocery store are as cheap as white vinegar, but this simple acid is remarkably useful throughout your house, in the garage and even in the garden. Can one cheap, relatively mild product really do the job of many powerful and dangerous chemicals under my sink, you ask? Yes, and much, much more. Here are just a few of the remarkable uses for white vinegar.

Reader’s Digest had a good summary of its varied uses.

The word vinegar comes from “sour wine” in French, and is the byproduct of a common bacteria (Acetobacter) that feeds on alcohol when enough oxygen is present. The cheapest form of vinegar is distilled white vinegar made from cheap sources of sugar or starches such as grain and fruit. Distilled white vinegar has all the varied impurities removed resulting in a potent, consistent product of pure grain vinegar that is then diluted with water to 5% acidity. You may also see “cleaning vinegar” in stores which is exactly the same distilled white vinegar but with 6% acidity.

Acetic acid in vinegar makes it an excellent natural disinfectant that is effective against food-borne pathogens like E. Coli and salmonella. The acid is also good for cutting grease and dissolving basic substances like calcium deposits from hard water. There are many health benefits from consuming good quality unfiltered fruit vinegars that I will cover later, but distilled white vinegar is especially valuable for many external uses and around the home. Here are just a few:

Use 1/4 to 1/2 cup white vinegar in the rinse cycle of your washing machine to brighten colors instead of color-safe bleach (Note: be careful never to mix bleach and vinegar in the same load, it emits toxic chlorine gas). A similar amount in the rinse cycle is an excellent fabric softener and it will also stop static cling. A full cup in the wash cycle will disinfect—perfect for a load of cloth diapers or musty rags. A cup of vinegar will also set the colors in new clothes so you don’t have to worry about that red shirt or dark socks bleeding. Soak yellowed whites and sweat or antiperspirant stains in hot water with a little vinegar before washing to produce much w. If your washer smells musty you can clean it by running an empty cycle on the hottest setting with several cups of vinegar. Most people use too much laundry soap which leaves a scum that grows mildew.

Make your dishes sparkle by adding a splash of vinegar in the rinse water or put 1/4 cup in each load of the dishwasher. Disinfect wooden cutting boards by wiping with straight vinegar. Make a general cleaning spray with a few drops of liquid detergent and 1 part vinegar to 4 parts water. Clean hard water deposits off sinks and faucets with straight vinegar and a dry rag. Wipe the fridge with half water and half white vinegar to disinfect and eliminate odors. Use straight vinegar to wipe off old grease and grimy dust from around the stove and above the fridge. Make a paste with equal parts salt and vinegar to scrub stains from dishes including pots and pans and to polish brass and copper. Polishing silver is easy with the foaming action from white vinegar and baking soda. Minor grease clogs in drains can sometimes be cleared by dumping a ½ cup of baking soda down it (with a funnel) and then pouring 1 cup of vinegar. When the foaming is done, flush with hot water.

In the winter spray your windshield every few weeks with 3 parts vinegar to 1 part water to keep frost off. Clean windshield wiper blades with straight vinegar to keep them supple so you have less streaks.

Use vinegar to clean blinds, revitalize carpets, clean pet odors and urine, get rid of smoke smell, rid your pets of fleas, wash your vegetables, clean hands after working with concrete or masonry, wipe kid’s pen scribbles off the wall, and so much more. You can even make scented vinegar cleaners with citrus or natural herbs.

Don’t use vinegar on surfaces that will be etched by its acid such as cast iron or aluminum pans, stone floors, granite countertops, and ceramic tile grout. Be careful too about surfaces that are being protected by oil-based products like waxed wood, and the screens on computers or phones.

Some of these vinegar claims aren’t as effective as touted and may take longer or require multiple applications to get the desired result, but vinegar remains one of the most versatile home products—especially for the price (a gallon jug at Walmart is less than $2.50). Vinegar lasts indefinitely on the shelf, so stock up on it instead of other expensive chemicals and cleaners. [END]